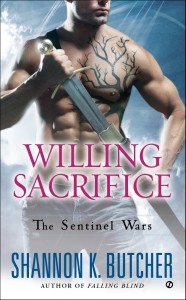 Torr spun to face the woman who’d touched him.

Brenya’s long silver hair whipped around her shoulders as she grabbed his arm and started to run, forcing him to follow where she led. A layered mess of fur, coarse fabric and leather covered her body, frothing around her calves with each hurried step.

They ducked into a rough hut made from inky black sticks and thick, stiff grass the color of gunmetal.

“No time for that. We are under attack.”

No way. Torr might get only one chance to find the woman he loved, and he was not going to waste it. “Your attack can wait. Where is Grace?”

Brenya pulled aside a leather hide covering a window and pointed across the clearing. Several huts dotted the area. One large fire burned in the center of the clearing, ringed by pink stones. Just on the other side of the fire crawled a reptilian animal twice Torr’s size.

It had six legs that sent it slinking across the ground like a centipede, but faster. Its long tail was forked, and each prong moved independently of the other. Both were thick and covered in bonelike spikes. Its elongated head was filled with rows of conical teeth meant for ripping apart meat and crushing bone.

“Your Grace is dead if you don’t help. Now go forth and slay the beast before it reaches my baby girls.”

A small child with white-blond hair raced toward a hut, but her chubby little legs weren’t fast enough to carry her out of harm’s way. The beast saw her and charged.

Torr drew his sword as he bolted out of the hut. A bellow burst from his lungs, drawing the creature’s attention away from the child.

It hissed, tensed its body, and a second later used that massive forked tail to fling itself toward him.

Torr leapt out of the way, rolling as he hit the ground. Rocks and sticks dug into his bare back, grinding the disk against his spine. The pain of it was a distant, inconsequential thing that he gave no attention to.

He came out of his roll, landing on his feet, his sword level and ready to swing.

The creature was only a few feet away. He could see now that it had massive eyes the color of swamp water. Its skin seemed to shift on its frame, creating a dizzying pattern of movement that drew his attention.

Nicholas was right. Torr was way too easily distracted.

From the corner of his eye he saw movement. A woman sprinted across the ground to scoop up the little blond girl and carry her to safety. For a second, Torr thought he recognized the woman. She almost looked like Andra, but younger.

Tori? It was possible, but the woman he saw was too old to be the same one who’d left Dabyr with Grace only a few months ago.

Now wasn’t the time to worry about who she was, not when the beast was preparing to charge.

Torr shifted to his left, using the fire to protect his back. There was no way to know if this creature was alone, and the last thing he needed was a nasty surprise.

Another hiss erupted from the reptile, and its tail curled up under it, preparing to launch it into the air again.

Torr held his ground. The thing charged through the air. He stepped cleanly out of the way, letting it jump headfirst into the roaring fire.

No! called Brenya, her voice a resounding boom inside his skull. Not the fire!

Torr had no idea what she meant until he saw that the creature wasn’t screaming in pain. It wasn’t even moving fast to escape the blaze. All it was doing was burning as it turned around for another attack.

And he wasn’t fireproof.

The creature launched itself toward Torr again. He spun out of the way, but the beast came so close that it left a singed patch across his bare ribs.

Blade in hand, he turned to face it, angling away from the fire and the surrounding huts. The lizard followed him, one huge eye focused on him and the other moving, scanning for more danger. Or prey.

Torr growled and thrust his sword at the creature, making sure he was the most dangerous target around.

The little blond girl was safely hidden inside one of the rough buildings, and Brenya had the good sense to stay out of sight. A couple of flimsy doors were cracked open enough for Torr to make out people watching.

The woman who’d rescued the little girl was struggling against the hold of two other women, who barely managed to restrain her from combat. Her short sword gleamed under the orange sky, but she was unable to break free without using it on them—something she was apparently reluctant to do.

Good. The last thing he needed was another distraction, and an unknown partner in combat was definitely that. The odd patterns on the lizard’s skin were more than enough to absorb his attention, especially now that they seemed to be moving faster under the flames coating its hide.

He kept backing up, drawing the beast away from the women.

The ground beneath his feet became softer. The humidity hugging his skin grew thicker. Shadows enveloped him, and heavy drops of warm water hit his bare shoulders.

He’d entered the edge of the surrounding forest. As thick as the trees were here, the lizard was going to slam its head into a trunk if it tried to come flying at him again.

The creature’s skin hissed as water dripped onto it, but the flames remained steady. There was too much humidity here for the brush to ignite. At least Torr hoped that was the case.

A thick black tree trunk loomed on his left. A low branch ran nearly parallel to the ground, supporting a rustic swing made from rough rope and a warped plank of wood. The tree’s metallic leaves reflected the firelight in a dazzling display of indigo and gold. If not for the hissing creature and its flaming skin and bone-shattering teeth, Torr would have found this place strangely beautiful.

He slowed to a stop, choosing a location just inside the tree line. The dense tree growth was going to impede his blade, but not nearly as much as it would the beast’s flying trick.

Torr charged, keeping his sword angled to fit between the surrounding branches. He went airborne at the last moment, avoiding the lizard’s open jaws as he leapt over its head. A razor-sharp tongue flicked out, slicing cleanly through the fabric of his jeans. He landed on the creature’s back, ignoring the searing lick of flame singing his skin. All he needed was one clean blow—one single jab into the lizard’s brain and then he’d deal with his burns.

Staying atop its thrashing back, he gouged the tip of his sword right between the swamp water eyes. Rather than sinking cleanly through meat and bone, his blade merely skittered off the thing’s tough scales with a shower of greenish sparks.

No way was he going to be able to bash through that hide without a sledgehammer. He needed a soft spot.

The searing heat drove him off the beast’s back. He jumped up onto a low branch, out of the lizard’s reach.

The tree swayed with his weight, raining fat drops of water that had pooled on leaves above him.

He swiped the water from his eyes and watched for an opening below.

The lizard reared up on its forked tail, obviously preparing to launch itself into the tree after Torr. He stood still, flexing his fist around his sword in anticipation.

As soon as the beast became airborne, Torr spun himself around the trunk with one arm, putting the solid girth of the tree between him and the lizard.

It slammed into the wood with a hard thunk, followed by a screaming hiss of pain. By the time Torr eased himself to the ground, the lizard was on its back, thrashing in the matted, metallic leaf litter that covered the ground.

He didn’t hesitate to take his shot, keeping out of range of that sharp tongue. He slammed the tip of his sword into the thing’s chest, feeling his blade shift as it slid between two ribs. With a savage burst of strength, he changed the angle of the sword and shoved it deeper into the lizard’s rib cage.

Thick orange blood poured from the wound. Its body convulsed, and the heavy forked tail hit Torr like a battering ram.

He flew through the woods a few feet before coming to a painful, abrupt stop against a tree trunk. His head rattled with shock so fresh that there was no pain yet. But it was coming. The wind was knocked from his body, and it was all he could do to still the panic of suffocation. Only the need to be sure the lizard was dead gave him the will to regain his feet.

The pain arrived like a speeding freight train—massive and completely unstoppable. A wave of dizziness caught him off guard. His eyes refused to focus enough for him to tell if the animal was moving or if it was just a trick of the eyes.

He stumbled forward, sword ready. His chest burned with the need for air. Pain radiated out from his spine and skull. His legs were strangely weak, reminding him of the time he’d been paralyzed and helpless.

Torr had promised himself he’d never be helpless again, yet here he was, falling to the ground, and there wasn’t a thing he could do to stop it.