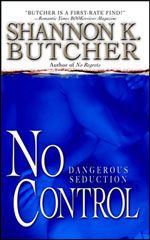 No Control is available from the following online vendors, as well as at your favorite local bookstore.

Lana Hancock knows all about danger — and betrayal. Eighteen months ago, she was captured by a terrorist group known as the Swarm while one of its member, a rugged man with sinfully dark eyes, did nothing to help her. Now when she’s freed and desperate to put it all behind her, the unthinkable happens. The Swarm is targeting Lana once again and the man who stood silently by has become her protector. But can she trust him?

Delta Force operative Caleb Stone will never forget the hatred shining in Lana’s eyes. Ordered to take down the Swarm by infiltrating its ranks, Caleb couldn’t blow his cover to save her — no matter how much it haunted him. Now, gifted with a second chance, he vows to move heaven and earth to protect her…and fulfill her every desire. But the Swarm has reorganized. It’s more powerful than ever and hell-bent on revenge…

Lana Hancock prayed for a swift death. The hood over her head made it hard to breathe, as did the smell of her friends’ bodies. Through a tiny slit in her hood that her captors didn’t know was there, she could see Bethany’s lifeless eyes staring at her.

Lana tried to turn away, but even the smallest movement sent pain screaming through her broken limbs. The man who had broken them, Boris, came back into the cave and she knew this was the end. Whatever her abductors told Boris to do, he did. She’d heard them order him to kill her right before they left, and she’d been lying here, waiting for the end for what seemed like days.

She was going to miss her family. Her friends. Her fiancé.

She wanted to see her nephew grow up and spoil him with loud presents that would drive her sister crazy. The little drum set Lana had bought him for his birthday was tucked in her closet. She hoped they’d find it and give it to him when her family cleaned out her apartment.

Boris pulled out his gun and crossed the dusty cave to where Lana lay. He was a skinny man with bright blue eyes and dimples that made her stomach turn. A sadistic killer shouldn’t have dimples.

His booted feet stopped only inches from her face. Part of her was afraid, but most of her was simply grateful he was using the gun instead of the pipe again. At least this way would be fast. She hoped.

She saw a shadow cross the mouth of the cave, then another and another. Maybe her abductors were back to watch it happen. Maybe she was hallucinating. Lana couldn’t bring herself to care. She was too tired. Too weak.

He reached down and ripped at the tape that was holding her hood closed around her neck. The movement caused broken bones to grind, and her dry scream echoed against the cave walls.

She must have passed out, because when she opened her eyes, her killer was looking down at her with a concerned frown, patting her cheek as if to revive her. When he saw she was awake again, he nodded once as if satisfied and stood up again. Apparently, he didn’t want to kill her if she was unconscious.

His gun aimed for her head, thank God. Like with the others he’d killed, it would be a headshot. Quick and painless.

A thick arm appeared from nowhere and wrapped around Boris’s head, pulling it back while a second arm sliced his throat open with a knife. Blood spewed out from the man’s neck and his gun clattered to the hard ground.

Lana tried to figure out what was happening, but she couldn’t move her head. Couldn’t keep her eyes open.

“We’ve got to get you out of here,” said a deep, tight voice she’d heard somewhere before.

Pain sliced through her and she realized she was being lifted. Her broken legs dangled painfully over a man’s arms, but she kept herself from screaming. She couldn’t alert her captors that she was escaping.

Lana forced her eyes open just as he carried her out of the cave. Light seared her retinas, but she welcomed it. Light meant freedom — something she thought she’d never again experience.

He laid her down and spoke in a quiet voice to someone nearby. “She’s the only one alive.”

“Not for long, she isn’t,” said a second man. “And not if they find out she made it out alive.”

Lana’s body throbbed in time with each beat of her heart. He was right. She wasn’t going to last much longer. She could feel herself growing weaker by the second. Maybe she was bleeding somewhere.

At least she wasn’t going to die in that cave.

“Our team took down three of them.”

“How many were there?”

“I don’t know. I only saw two, and not closely enough to ID them. I got orders from that skinny bastard, Boris. There could be another dozen for all I know.”

“You took care of Boris?”

“Our men are in the hills. They’ll find anyone who got away,” said the second man.

Lana wasn’t sure what that meant, but she knew she should. What they were saying meant something to her, but her brain was too foggy to figure it out. She was using all her strength just to keep from screaming.

If she screamed, they could find her.

A shadow fell over her face and Lana looked up into the face of Miles Gentry — the man her abductors had hired to bomb a U.S. elementary school.

Lana couldn’t breathe. She wasn’t safe. Not with him. He was a monster — a man willing to kill children for money.

He must have seen her fear, because he smoothed her matted hair back from her face and said, “Shh. It’s okay. I’m a U.S. soldier. I’m not going to hurt you.”

Liar! Lana tried to pull away from his touch, but her body wouldn’t move, wouldn’t cooperate.

“Back off, Caleb. You’re scaring her,” said the second man.

Caleb, or Miles, or whoever he was moved away. Behind him, from high in the rocky hillside she could see twin flashes of sunlight reflecting off glass. Binoculars.

With a painful stab of clarity, she realized she was being watched.

She tried to tell the men, but her lips were swollen and stuck together with dried blood and she couldn’t seem to form a coherent word.

The wind kicked up and dust choked her lungs. She tried not to cough. Someone pulled a sheet over her head to keep the dust out. It didn’t help. She couldn’t keep from coughing and as soon as she did — as soon as her broken ribs shifted — the pain ricocheted inside her until all she could do was gasp for air.

All the pain and going without food or water for days was too much. She had to give up and let go. She couldn’t take any more.

Lana’s mind shut down and she welcomed the oblivion as it came to claim her.
Back to Top.